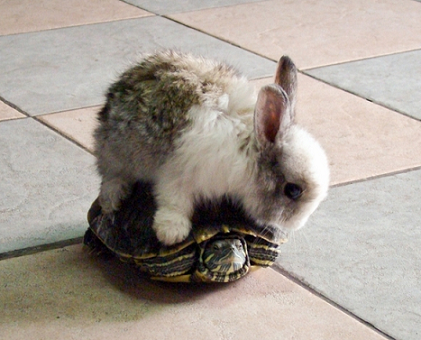 Hi! My name is Amy. Today, I will tell you the true story of the tortoise and the hare. Now, I know that some folks will groan and say "We've heard that story too much!" However, hold your horses first! This is the true story which changes all the boring details into extraordinary facts that will marvel you! This story also teaches you a lesson that even teachers often forget. We should always be cautious about it too. So here it goes...
Once upon a time there was a tortoise and a hare. They both were very good at bragging.  However, the hare was lazy, and the tortoise was hard working. Then, on a bright summer's day, the hare asked the tortoise to race him. The tortoise didn't want to lose so he agreed. Thats when the two animals' fate was decided.
Of course at first the hare zoomed away until he became a dot. But on the way he saw HOTEL SERVICE. He had to go there. But he didn't know that some devils were trying to trick him to lose the race and had put up the 'hotel service' sign. So the hare who didn't know anything (because the devil's shapes shifted into the popular hare band 'Hell Fire Hares') got coaxed by the devils and fell asleep. Then the tortoise came. Then he saw the hare and thought "shame on you! tee hee!"
The tortoise slapped the hare's face. The hare woke up and howled so loud that it could have woken up the dead (and did, the graves all over the world started to move). Not only that, but the world's first earthquakes and volcano eruptions started to happen, and the howl was so loud that the vibrations hauled the tortoise all the way up to the finish line. Then, the hare came, and while the tortoise was bragging about his beating the hare in the race, the hare smacked the tortoise's back, which slowly changed and, POOF, the tortoise got a new home which today is called the tortoise's backshell.
A day later the hare came back with his eyes blood red and a runny nose. The runny nose became better but the red eyes did not, the tortoise's hit was too powerful.
From then on the two rascals lived far away from each other, one beside streams, and one in the forests. And this is the true story of the tortoise and the hare which has changed so many peoples' lives today.
THE END!!!!!!!!!!!!!!!!!!!!!!!!
이 게시물을
목록