On the day it snowed heavily in Busan, I opened my eyes sleepily because I felt freezing cold wind coming into my shirt. It was much colder than the normal winter days, so I seriously didn’t want to come out of my bed, which was so warm and cozy. I was just tossing about in my bed, my teeth chattering, when my mom shouted from outside of my room, “Hey Sol, why don’t you come out and see this? It’s snowing!” I was so shocked and excited at the same time when I heard this. Snow is not common in Busan so maybe I was more excited than the children living in Seoul. I looked out the window, and I saw very white snow falling down. As soon as I saw it snowing, I called all of my friends to come out to the field to play in the snow.

It had already started to melt when my friends and I arrived at the field. After some time and many people stepping on it, the snow became quite dirty, therefore we decided to make small snowballs to have a snowball fight instead of making a snowman. It was hard to clump the snow because it was melting rapidly; water kept dripping from it. Although it was so cold that day, I started to feel warm as I worked extremely hard. Eventually we made dozens of snowballs, and we were so happy that we jumped with joy.

However, suddenly a big group of boys gathered around our snowballs and started to crush them with their feet. I got so angry I marched towards them, even though my friends told me not to go. I confronted them and, honestly, they were not big─they were huge!! I got a little scared in the moment, but it didn’t last for a long time.

“Hey! What are you doing? Those are our snowballs. You should not have crushed them!” I yelled.

“Oh, those were yours? Well, we cannot make them back, can we?” One of the big boys spoke sarcastically, grinning at me.

“But you shattered all our hope to play and those snowballs were not even yours!” I retorted.

And I shouted several times to make them apologize to me, but they never did.

Well, our snowball fight was cancelled because when we tried to make snowballs again, the snow had already melted. In the end, we just played at the playground. It was really depressing, but at least we had fun at the playground. 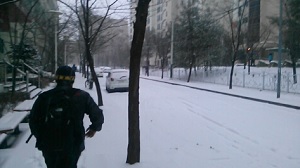